Working for Mozilla on designing the next versions of Firefox, one of the great benefits is that we get to do our designs in the open, and improve all web browsers — not just our own product.

People are often surprised when we tell them that we’re not trying to “win the marketshare game,” but instead make sure that there is a thriving, diverse ecosystem on the web, with no single dominant player — which at this point, Mozilla has succeeded spectacularly at — compared to a few years ago, when the browser market was stagnant, and one browser dominated the web.

That’s why it’s so exciting to see our designs being adopted by other browser makers. A while back, I wrote a comprehensive overview on download managers in the major web browsers, and made some recommendations on how to fix them. I also encouraged other browsers to implement this approach.

You can read the entire article, but I’ll give you the short version. Here’s the proposed design that was posted in that article: 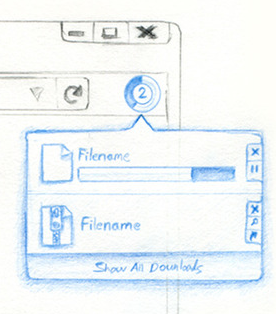 Today, I was very happy to see that Safari has implemented our design in their upcoming release, as evidenced by (screenshots posted at Dustin Curtis’ site, since removed), here’s the image he posted: 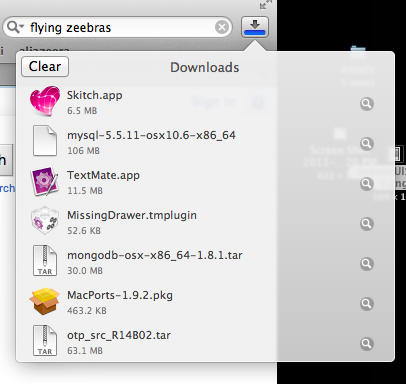 There’s of course a lot more detail to this than just a couple of screenshots — covered in the in-depth article — but they seem to follow the overall design path we described there.

So what’s the status of this work in Firefox? You can follow along over at the Download Manager feature page, but the short story is that it’s currently being updated to the new panel UI that was introduced in Firefox 4, and is currently undergoing review. The aim is to land this as soon as possible, which with our new, accelerated release cycle shouldn’t be far away.