Lately, the Metrics team here at Mozilla have conducted some great research into why some people leave the installer before Firefox is finished installing, uncovering a couple of bugs in the process, and improving the way we ask people what will be their default browser.

(Also make sure you read part 2 of this article)

The team looked specifically at the Windows installer — which makes sense, since that’s where most of our new users are coming from — but there are some substantial issues with the Mac install experience that we will explain in more detail.

There’s a lot to like about Mac OS X, but in their quest to make things as simple and uncomplicated as possible, Apple actually made some things worse for the (mythical) average user, as well as for people new to the Mac. One of these areas is application installation.

If you are unfamiliar with the Mac OS X install process, let us quickly outline how application installation on Mac OS X works:

While this process is familiar to experienced Mac users, and removes the need for uninstall scripts, very few new users that recently purchased their first Mac know how to do this. Unless they have a friend that has shown them how it works, it doesn’t make sense to anyone coming from a different platform.

To mitigate this, the download page for Firefox — as well as pretty much every other Mac application on the planet — attempts to tell you what to do once you have downloaded the disk image: 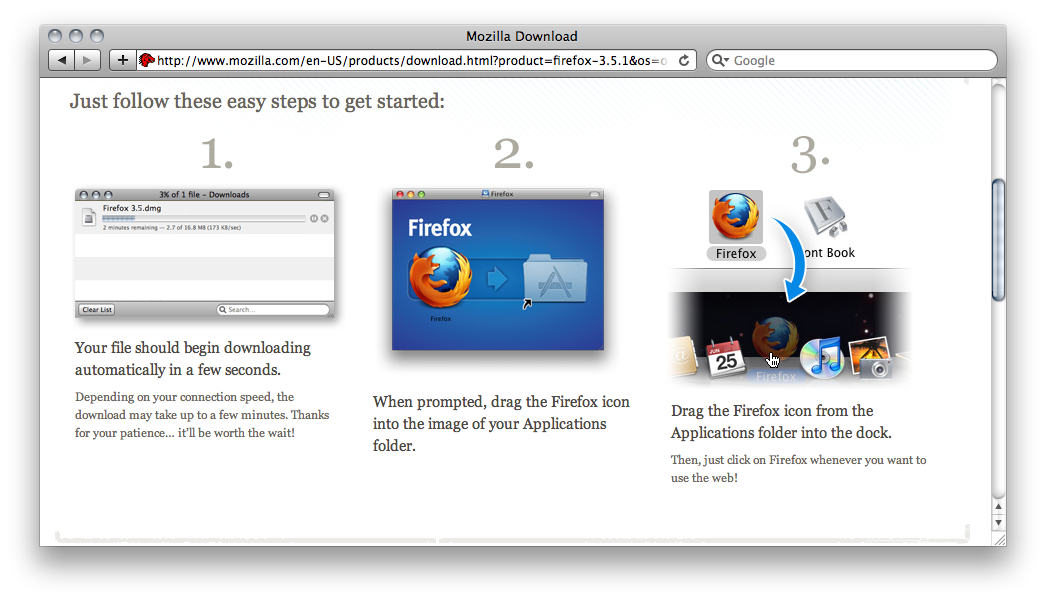 The problem with this should be obvious — by the time the download is complete, that web page is usually long gone, and many people don’t read these kind of instructions at all.

To make matters even worse, Firefox is often one of the first applications that people new to the Mac go to download and install, since they want the familiar browser they have used earlier. They might catch on to how this works later, but it’s a fair bet that they don’t know this as new Mac users.

Some common errors that we have seen repeatedly among informal testing with friends and family are:

Dragging the application to the dock directly

This creates a link to the file inside the disk image, which means that every time they try starting Firefox, the disk image is unpacked and mounted, and starting of Firefox becomes very slow, which makes it a bad experience.

This is very common, and the logic is that the first time they started Firefox, they had to do this, so they continue doing it. This makes starting Firefox a chore, since it takes a lot of clicks to accomplish.

What’s interesting is that Apple are aware of this problem, and even added a warning that shows up when you try to run an application from the disk image:

Quick, spot the problem! It doesn’t actually tell you anything about why it’s a bad idea to run stuff from a disk image — or even what you can do to avoid the problem — they just state that you’re about to do so. Oh, and that the file is from the Dangerous Internet. For a company that prides itself on informative dialog boxes, this is quite surprising.

How we can make the Mac install experience better

We can make some simple fixes to the current approach to make the experience better for people new to the Mac, while still retaining the power to put the file anywhere, per the classic OS X model.

What problems do we want to solve?

People that don’t understand the standard installation process on Mac should be helped towards their goal.

Downloading Firefox and then forgetting about the download should be less common.
Maintain the standard installation model for the users that prefer the drag & drop install method.
Make it possible to set Firefox as your default browser during the install process.

How do we fix these problems? By supplying a dedicated installer in the disk image, similar to the standard Mac OS X application installer: 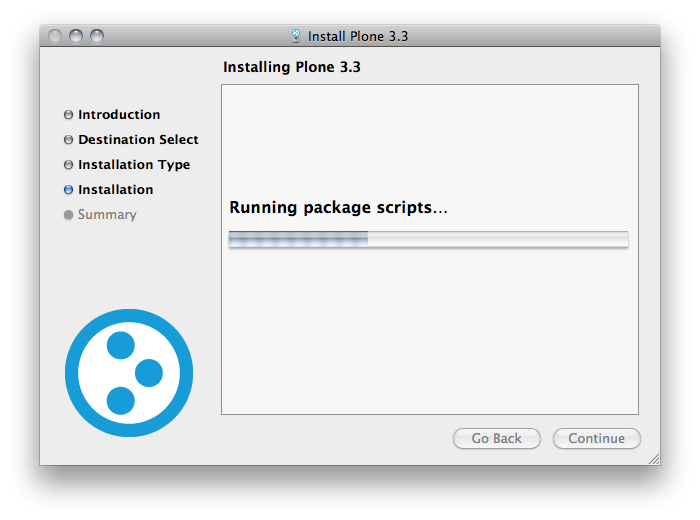 We can fix all of these by using some capabilities of the standard Mac package installer and disk image creation tools supplied by Apple. In particular, they have features where you can run an installer when a disk image is mounted, like Apple does with some of their own disk images. This, combined with the auto-mounting of disk images downloaded via Safari, gives us an installation flow that is likely to not lose people along the way.

Note that experienced Mac users should be able to cancel the installer at any time and drag the Firefox application to the location they want instead, thus there should be no loss of functionality or flexibility for them.

Help us make it happen

At Mozilla, we’re currently in crunch mode to get Firefox 3.6 ready, and therefore we have limited resources to look at creating a proper installer for Mac OS X right now. If you’re an experienced Mac OS X developer that would like to help out with creating a new installer that we can help test, we’d love to hear from you. Please send an email to the dev.apps.firefox Google Group — or via the traditional mailing list interface. If you want to track progress, we have filed a bug for the installer improvement that you can subscribe to.

Also make sure you read part 2 of this article.